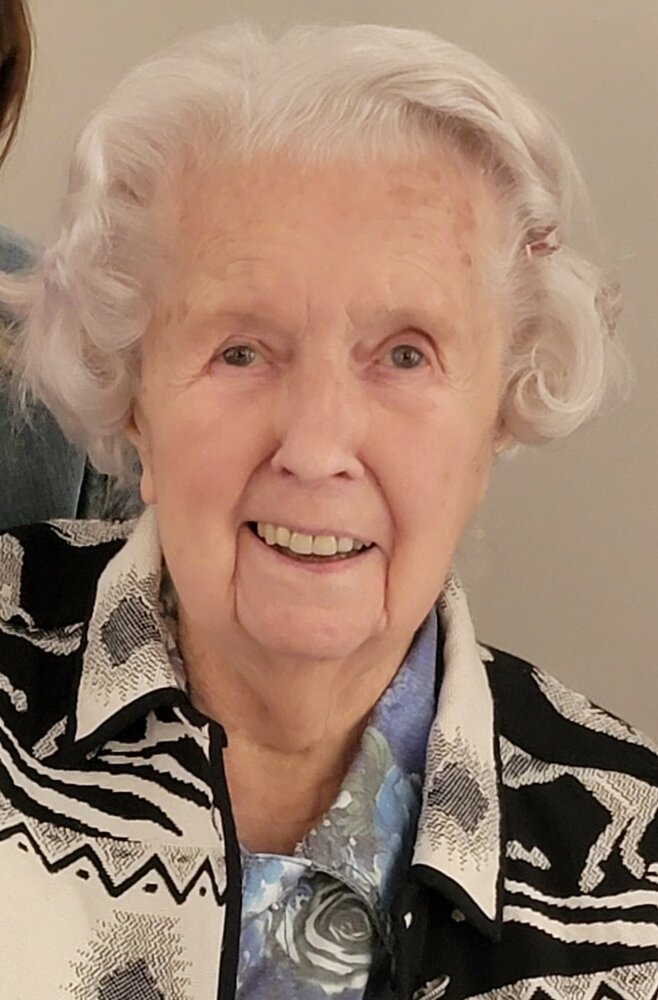 Please share a memory of Gloria to include in a keepsake book for family and friends.
View Tribute Book
Gloria Delores Doyon (nee Allison), after 100 years of sharing her love, acceptance, laugh, and common sense, passed from this world as calmly as she lived life. She was preceded in death by her husband, Donald; and infant daughter, Cheryl. Gloria and her spirit live on in her daughters, Sue Schroeder and Andrea Pickenpack, son, Peter Doyon; and their families – grandchildren, Michael and Christopher Pickenpack, Allison (Matt Gottschalk) and Sydney Doyon, and Alison Raman (Ravi), Jane Doyon; great-granddaughter, Madison; and great-grandson, Bodhi. She also is remembered fondly by extended family and their friends. Gloria as a young girl lost her father to polio. Others might have described the ensuing years as “hard times” but Gloria brushed aside such definitions and talked matter-of-factly about how life was lived back then. She established fast friendships that lasted lifetimes, including with a group who called themselves the 10 Teens, that grew beyond skating parties on Lake Phalen to bridge club and lake vacations Up North with their families. Gloria met Don at one of those skating gatherings. Soon after, war was declared, and she and Don married as he entered basic training before he was dispatched to the U.K. Like many women of her generation living on the East Side she worked at 3M during the war. She liked to tell stories of the activities the company organized to keep employees engaged and distracted from war news. With Don’s return she set up a neat, warm, loving home and raised 3 children through the ‘60s and ‘70s – applying her calm, accepting nature to that generation and subsequent adventures of the grandchildren. She lived independently in her home until only a few years ago. Besides her demeanor, Gloria is known for her chip dip, krumkake, whirligigs, and hotdish, and her trendy fashion sense. Red seemed to pop up quite a bit on her watch bands, coats and gloves. She was the master of the five-minute conversation, a dog lover, and slipper connoisseur. On Monday, December 20th, 2021, we formally will Celebrate Gloria’s Long Life at Anderson Funeral Home, 1401 Arcade Street (Hwy 61), Saint Paul. Visitation begins at 2:00p.m., followed by a Service at 3:00p.m. She will be interred alongside Don at Fort Snelling National Cemetery. In lieu of flowers or donations, consider contributions be made to the ASPCA or Alzheimer's Association.
To send flowers to the family or plant a tree in memory of Gloria Doyon, please visit Tribute Store
Monday
20
December

Share Your Memory of
Gloria
Upload Your Memory View All Memories
Be the first to upload a memory!
Share A Memory
Send Flowers
Plant a Tree