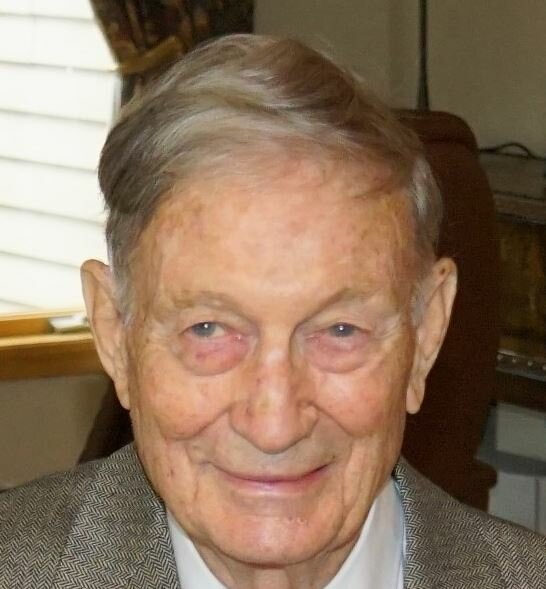 Please share a memory of Roger to include in a keepsake book for family and friends.
View Tribute Book
Roger B. Olsen, age 98 died on December 23, 2021 at his home in Maplewood, Minnesota, surrounded by his loving family. Roger was born in St. Paul, MN to Bernhard and Ingeborg Olsen on March 30, 1923. He grew up on the Eastside of St. Paul and graduated from Johnson High School. After high school he attended the University of Minnesota until he was drafted into the US Army in 1943. He served in the Signal Core and was present at the signing of the Japanese surrender in Tokyo. When he returned to Minnesota, he completed his Business degree from the University and went on to work for 3M for 34 years. He was married to the love of his life for 72 years, Jane Imsdahl Olsen, until her death in August, 2021. Roger and Jane enjoyed traveling and spending time at their lake home, which Roger, his father and son built together. He was also an avid and lifelong golfer. But most importantly, he enjoyed spending time with family and was so proud of each and every one of his children and grandchildren. He is also preceded in death by his parents, siblings, Mabel Bjostad, Ed Olson and Ingrid Rau and many friends. He is survived by his children Thomas (Jeneal) Olsen, Sally (Barry) Peters and Kristin (Don) Olsen; grandchildren Kathryn (Josh) Retka, Sara (Kris) Hjelmeland, Eric (Katie) Olsen, Andy (Kim) Peters and Kristin (Joe) Spencer; and nine great grandchildren: Myah, Elsa, Molly, Anika, Simon, Hannah, Bjorn, Lucy and Soren; and many nieces and nephews. Due to Covid concerns, a private family service is planned to celebrate the life of Roger. Many, many thanks to the staff and hospice staff at Ecumen Seasons at Maplewood for the care and friendship given to Roger these past three years. Memorials preferred to East Immanuel Lutheran Church, 1173 Payne Avenue, St Paul MN 55130.
To send flowers to the family or plant a tree in memory of Roger Olsen, please visit Tribute Store

A Memorial Tree was planted for Roger
We are deeply sorry for your loss ~ the staff at Anderson Funeral Home
Join in honoring their life - plant a memorial tree
Services for Roger Olsen
There are no events scheduled. You can still show your support by sending flowers directly to the family, or planting a memorial tree in memory of Roger Olsen.
Visit the Tribute Store
Print
Online Memory & Photo Sharing Event
Online Event
About this Event