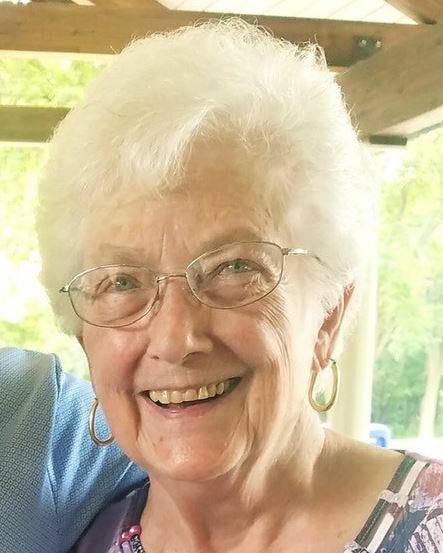 Please share a memory of Beverly to include in a keepsake book for family and friends.
View Tribute Book
Beverly Ann Peltier was born on April 9th, 1933 to Roy and Alice Peltier in St. Paul, MN. Bev was their third child, joining twin sisters Verna and Vera who were one year and five days older. The three young sisters formed a special bond and remained life-long friends and confidants. The family continued to grow over the years to eventually include four brothers and two more sisters. The 1949/1950 school year was a special one because all nine of the kids were in school at the same time. Her mother, Alice, was a true Superhero. Bev met Russ, the love of her life, when they both worked at Borgstrom’s Pharmacy located at Payne and Case on St. Paul’s East side. Bev graduated from Johnson High School in 1951 and married Russ less than a year later, on April 19, 1952. The young couple spent a short time in Bellville, IL while Russ served in the United States Air Force. Upon their return to St. Paul, Bev went to work at the First State Bank of Payne Ave. while Russ studied pharmacy at the University of MN. Bev and Russ welcomed Bradley Arthur to their union in 1959 and Brenda Kay in 1962. She was an active and involved parent in her children’s lives for many years. PTA, carpool, Brownies and more. Bev supported her husband’s profession with her leadership in the MN State Pharmacists’ Auxilary. She was the consummate hostess and absolutely loved hosting family, friends and business associates. Her Swedish meatballs, fruitcake and blueberry pie were some of her greatest hits. Russ and Bev were the majority owners of Borgstrom’s Pharmacy for many years. She started working regularly in the business in 1975 when the store moved into its large home on the corner of Payne and Jenks. Bev was responsible for developing the store’s gift department over the years and was proud to have been one of the first Precious Moments dealers in the Twin Cities. The store sponsored a popular Collector’s Club and many of her customers became good friends. The couple traveled extensively in the 1980’s and 90’s. Asia, Scandinavia, Mexico and Hawaii were some of their favorites. Bev did take one trip without Russ. She joined her sister Vera on a very special pilgrimage to Italy with Vera’s church group. It was a spectacular experience for them both. In their later years, Russ and Bev spent extended vacations in Florida, Alabama, Arizona and California. Church was also a big part of Bev’s life. She grew up Catholic and caused a bit of a scandal when she married Russ – a dyed in the wool Lutheran lad. They were active members of Arlington Hills Lutheran, Roseville Lutheran and most recently right here at All Saints. Russ would bring his iPad to Bev’s apartment every Sunday morning and they worshiped via the livestream as recently as last Sunday. Family remained the most important thing in the world to Bev to the very end. She welcomed Jon and Moira to the family as if they were her own children. Dementia blurred the details for her but she loved seeing a familiar face. Russ visited her with their dog Ole every single day since she moved into memory care 16 months ago. Those visits became the highlight of her life as she gradually slipped away. The family is especially thankful for the loving care she received at Norris Square. Bev passed away peacefully and unexpectedly on the morning of February 9, 2022 in her Norris Square apartment. She was 88 years old. Bev was preceded in death by her parents Roy and Alice Peltier; her sisters Verna, Vera, Darlene and Judy; and her brothers Lloyd, Bob and Don. She is survived by her husband Russ of nearly 70 years, children Brad and Brenda and her brother Jerry. She is also survived by many nieces, nephews and Godchildren, as well as Jon and Moira and their families. Funeral service at 11:00am on Monday, February 14. All Saints Lutheran Church, 8100 Belden Blvd., Cottage Grove, MN. Visitation 2:00pm-4:00pm on Sunday, February 13 at the church and one hour prior to Monday’s service. Private interment Forest Lawn Cemetery, Maplewood, MN. Masks required for funeral and visitation. In lieu of flowers, memorials preferred to Osman Auxiliary, All Saints Lutheran Church or Norris Square Arbors memory care.
To send flowers to the family or plant a tree in memory of Beverly Boogren (Peltier), please visit Tribute Store
Print
Sunday
13
February